Xiaomi has improved its first smartphone launched to the Chinese and European markets with 5G. The Mi Mix 3 5G has gone through Tenna again and we see that its RAM and storage has improved again.

The Xiaomi Mi Mix 3 with 5G when it went on sale in China and Europe only added 6GB of RAM and 64GB of storage. However, the Tenna specification list mentions two more totally different configurations, thus being a 6GB + 128GB version and an 8GB version of RAM + 256GB of storage.

The list also mentions that the Mi Mix 3 5G runs Android 10, the latest version of Android. Except for these differences, the rest of the features are the same. So it is expected that Xiaomi will launch these two new versions coming soon in China, the market with which it seeks to win more sales along with the Mi 9 Pro 5G.

The Xiaomi Mi Mix 3 with 5G officially presented in February at the Mobile World Congress in Barcelona, was one of the first to incorporate the  Qualcomm® Snapdragon ™ 855 flagship mobile platform, which supports maximum and stable performance. In addition, Mi MIX 3 5G is equipped with the Snapdragon X50 5G modem and Qualcomm RF Front-End solutions, which allow you to reach Gigabit-class download speeds.

Inside the Mi MIX 3 5G is the new Snapdragon 855 mobile platform, which has been developed using the latest 7-nanometer manufacturing process. The Qualcomm Kryo ™ 485 CPU incorporates eight cores to achieve an excellent balance between performance and energy efficiency. Thus, the performance of a single core is up to 45% higher, which is a great leap compared to the previous generation. For its part, Qualcomm Adreno ™ 640 GPU experiences a 20% improvement in performance compared to the latest generation. The Qualcomm® Hexagon ™ 690 processor multiplies by two the number of vector processors compared to the previous version, resulting in an AI performance up to three times faster in this Qualcomm IA engine.

To support the use of applications that require high levels of device performance for long periods of time, Xiaomi has also developed a highly advanced hybrid cooling system for Mi MIX 3 5G. Rogers® HeatSORB ™ thermal materials implement a phase change effect, which quickly captures the heat generated by the device in demanding scenarios and delays temperature increases. Subsequently, a passive heat pipe composed of six layers of graphite disperses heat at a rate three times faster than the double graphite sheet. Also The Selfie Camera Technology Under the Screen Xiaomi Will take Longer than Expected 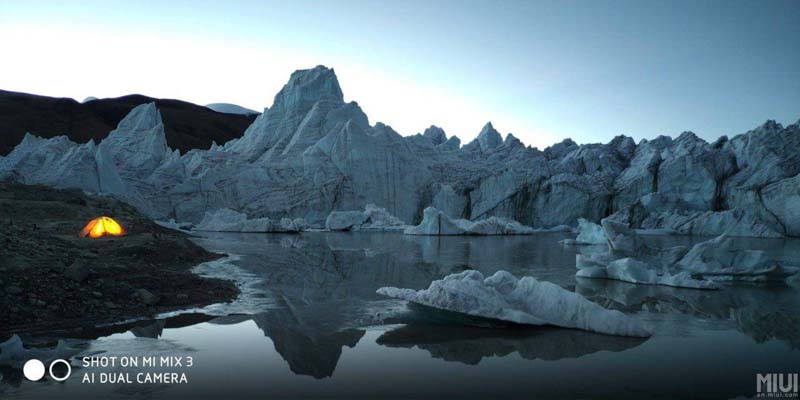 Mi MIX 3 5G has inherited the same dual 12MP AI camera from Mi MIX 3, which obtained a score of 108 DxOMark, and has all the AI features that users expect from Xiaomi smartphones, including the 960 fps slow-motion video function. For selfies, Mi MIX 3 5G offers a dual front camera configuration of 24MP + 2MP, which makes optimized use of the Sony IMX576 sensor to capture more details. The camera is managed by Qualcomm Spectra ™ 380 ISP to provide a fast and efficient experience, allowing more shots per load.

My MIX 3 5G incorporates a sliding magnetic mechanism, which improves the touch experience and offers more customization options. In this way, users can configure it to, for example, answer calls or activate the camera application. In addition, thanks to the sliding design, the frames of the device are considerably reduced, optimizing the screen-to-body ratio and achieving a full-screen sensation  . The device’s screen, 6.39 ”and 2340 × 1080 FHD + Samsung AMOLED, has an aspect ratio of 19.5: 9.

Xiaomi began working on the search for 5G solutions in May 2016, when it established a research team to delve into the standards of the fifth generation of mobile networks. As one of the leading companies that participated in the trials  of  5G organized by China Mobile, Xiaomi successfully tested the connection of the signal n78 in September 2018, just one month later, he completed the test mmWave signal (millimeter wave ). By then, only a handful of smartphone manufacturers   in the world had successfully completed it.

In order to continue innovating, Xiaomi reached numerous strategic agreements in 5G with key service providers around the world, such as 3, Sunrise, TIM or Vodafone, among others. The next step was to make 5G devices available to consumers and, to achieve this, Xiaomi has worked tirelessly with some of these operators since the early stages of the development of Mi MIX 3 5G .